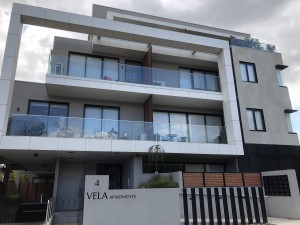 Designed by DO Architects and constructed by Project Group for Samuel Property, VELA Apartments at 4 Station Street, Blackburn encompasses stylish and spacious apartment living at its best.

Completed in 2016, the VELA Apartments complex incorporates 24 sleek and tasteful one and two bedroom apartments over four levels.

With an emphasis on open-plan living and an overall sense of relaxed comfort, VELA Apartments is a visually impressive design with a practical design touch.

Well positioned in a popular and sought-after quarter of central Blackburn, the VELA Apartments complex is in a friendly village atmosphere close to an abundance of cafes and boutique shops, being just a short 200-300 metre walk to Blackburn’s railway station.

Close to Blackburn Primary and High Schools, plus Morton Park, this property gives you the convenience of sophisticated city living without the crowds.

Environmental sustainability is a key element in the building’s design with reconstituted materials, water harvesting, solar collection and bicycle storage among its well-planned inclusions.

For any further questions or for rentals or sales enquiries, contact Savoy Real Estate, your number 1 choice and expert in VELA Apartments at 4 Station Street, Blackburn. 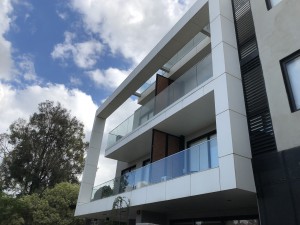 Blackburn is a suburb of Melbourne, Victoria, Australia, 17 kilometres (11 mi) east of Melbourne’s Central Business District. Its local government area is the City of Whitehorse. At the 2011 Census, Blackburn had a population of 12,796.

The origin of the name Blackburn is not certain, but may have been after an early settler or James Blackburn, who designed Yan Yean Reservoir. It lies within the City of Whitehorse, in Melbourne’s eastern suburbs.

Blackburn is bounded in the west by Middleborough Road, in the north by Springfield Road, in the east by an irregular line along streets to the east of Blackburn Lake Sanctuary and in the south by Canterbury Road.

This is the best real estate agent I have ever seen. I can’t compare anyone with savoy from my past experiences.

Friendly and professional service. They have provided a great experience through the entire process. I highly recommend Savoy, great work Jess!

Jess has just been amazing right from the start. Very prompt with replying to messages and takes action straight away with organising cleaners, gardeners and maintenance. Highly recommend Jess and Savoy. Thanks for everything so far Jess, truly a gem!