Comprising 33 apartments with basement car park, the complex at 7-9 Birch Street Bayswater was designed by DCA Building Design Consultants and was completed in 2013. The complex features a total of 26 two bedroom dwellings, four dwellings with two bedrooms and open study and three one bedroom dwellings. Each dwelling also provides living areas, kitchen, bathroom, laundry and a balcony. It is a three level building on approximately half an acre of land.

Located just 600 metres from Bayswater’s main shopping precinct, but far enough away to avoid any traffic and noise issues.

Residents at 7 Birch Street are well served by public transport;

The site is located within walking distance of bus stops on Mountain Highway, which are serviced by Bus Routes No. 664 and 745D.

• Route No. 745D from Bayswater to Boronia operates three services between 2.45pm and 6.40pm Monday to Friday.

• Additionally, the site is approximately 725 metres from the Bayswater Railway Station, providing further connection to the municipality and Melbourne. 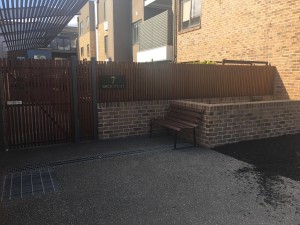 Bayswater is a suburb of Melbourne, Victoria, Australia, 29 km east of Melbourne’s Central Business District. Its local government area is the City of Knox. At the 2016 Census, Bayswater had a population of 11,758. The first Post Office in the area was Scoresby North, which opened on 8 May 1882 and renamed Macauley in 1884. When the railway arrived in 1889, a Bayswater office near the station replaced Macauley. In 1998 Bayswater Village (at the shopping centre of that name) office replaced Bayswater.

In the late 1940s, a number of German Templers (just released from the Tatura Internment Camp) settled in Bayswater and Boronia. Part of the Temple Society Australia, they built a Community Centre (1961) in Elizabeth Street and a Retirement Village, as well as Nursing Home Tabulam, in partnership with the Australian German Welfare Society (AGWS).

The Bayswater Wine Cellar is the oldest building in the region, erected in the mid 19th century to service loggers that travelled between the city and the Dandenongs. After falling into disarray, it was sold to a developer in late 2017 for ‘more than $2 million AUD’.

Top notch agency with top notch staff. Not only are their rates extremely competitive, but their service is by far the best I have come across in over 20 years of regularly using real estate agents. I get them to manage my rental property even though it is nowhere near their office.

We are tenants in a property managed by Jess, he is respectful, caring and genuinely looks after us. Out of all the rentals I have been in there has been no one like him. He is a large part of the reason we stay on as tenants in this property. We will eventually be buying an investment property to rent out and we know exactly who we will be going to.

We have been dealing with Jess for many years. He is always professional and efficient. We receive regular detailed statements and all communication is prompt. Definitely 5 Star service! Love your work Jess!!